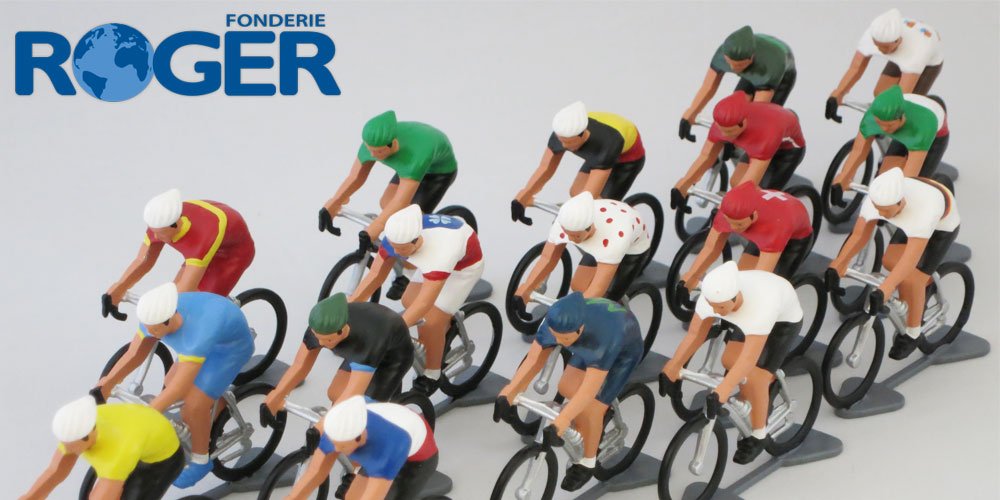 It’s been a long time coming. The first new shaped model in over 60 years in fact. But now Fonderie Roger have launched their new miniature ‘M’ racing cyclist. ‘M’ for Moderne or Modern if you don’t speak French :-)

The new Modern model racing cyclist is still produced in France, in the same factory in Egreville, using the same manufacturing methods and the same materials, ‘Zamak’ (Zinc & tin) as the original ‘R’ model cyclist. ‘R’ for Rouleur or All-Rounder.

So what’s changed from the traditional Rouleur model racing cyclist? Quite a bit. The cyclists cap has been replaced by a helmet. His seating position is now higher and the deeper dropped bars are lower. The frame is now more angular, has a frame bottle and the wheels a deeper section to represent carbon. He’s definitely a Modern cyclist. We just need a women cyclist now. But I guess we’ll have to wait another 6o years.

New Fonderie Roger ‘Blister’ packaging was also designed for the Modern model racing cyclist. On the front of the packaging is ‘Cyclistes PR’. The ‘PR’ standing for ‘Pierre Roger’ the grandfather of the current owner of Fonderie Roger..

The blister packaging is great for protecting the models when received, but isn’t a great keeper if you want to get the racing cyclist model out, which we hope you will do. Fortunately, CycleMiles has some ‘New Old Stock (NOS)’ of the original Fonderie Roger now ‘vintage’ boxes. The model racing cyclists can easily be put away and taken out in these boxes.

CycleMiles is honoured to be the first supplier in the UK to stock the Fonderie Roger ‘Modern’ model racing cyclists. We’ve already sold out of some colours of jerseys. Tour de France colours and national teams traditionally always being the most popular in the UK. We will get them again, so please call or email us if there are any particular colours you’d like?